Kashmiri cuisine is still quite a unknown cuisine for me. Actually i rarely cooked from this cuisine, however blogsphere pulled me to explore this cuisine. I have already two - three dishes from this cuisine. However for this month's Shh Cooking Secretly, a monthly event started by me, which is now hosted by Mayuri Patel we are cooking from Kashmiri Cuisine. Every month we are exploring different regional cuisine of India. After Himachali cuisine, this month's event goes for Kashmiri cuisine. You might know about the concept of this event, actually every month the members of this Facebook group get paired with an another member. Both discuss together secretly to get their two secret ingredients and cook with. Obviously we cook with those two ingredients and share our picture in the group, so that the other members pariticpate to guess the ingredients. Its quite an interesting play and this concept works awesome. We love to find out the ingredients though sometimes its quite a hard task. 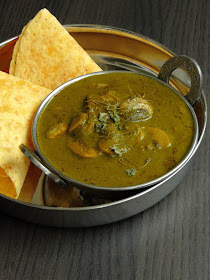 Kashmiri Saag Haddar Yakhni is a lipsmacking masala dish to serve with rotis, actually Saag means green vegetable while haddar is mushroom and obviously Yakhni is curd. Since my partner of this month is Avin S Kohli of The Yellow Daal gave me both Mushroom and curd as my two secret ingredients i looked for a Kashmiri dish, and as usual google master helped me a lot to spot out this dish from Jinoo's Kitchen. I was seriously happy to find a very prefect dish to dish out with my two secret ingredients and tried my hands in making this ultimate masala. A prefect pair for rotis and everyone at home enjoyed this lipsmacking green masala thoroughly with rotis. Quite a flavourful dish to make at home if you have mushrooms in your vegetable basket. 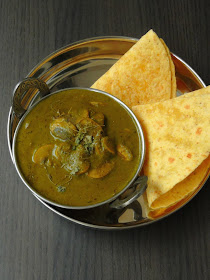 Add a tsp of rice flour, onions, dry ginger and garlic and grind everything again as a fine paste.

Heat enough oil, and saute the chopped mushrooms until they turns brown and shrinks a bit.

Pour in the ground masala and saute well until oil comes out. 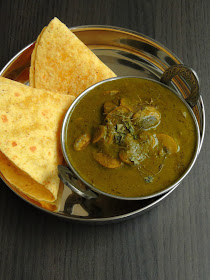 Add this paste to the curry and saute for few minutes.

Add the fried mushrooms and salt.

Add enough water and cook until the masala reach a semi thick consistency. 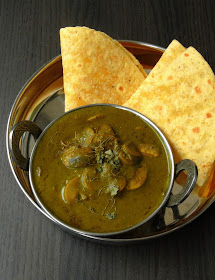 Thanks for visiting my blog n leaving ur valuable comments...Really am very thankful to u for taking time n reading my recipes.

Please note that any comments with seperate links to any external websites or blog events or advertisements may not be published. Thanks for understanding the same.