As like 'Q, W and X', the alphabet 'Y' dont have that much option when its comes to a Country name starting with alphabets and obviously i sticked with Yemeni Cuisine as am running a whole month of blogging marathon with Around the World in 30days as theme..Its wonderful to know that this cuisine is influenced very much by Indians as well, obviously most of the Indian spices are used in this cuisine.

Yemen has 2 major regions: North and South Yemen, which used to be different states until the end of the 20th century. The traditions and the cultural habits are similar in the 2 regions of Yemen and the cuisine seems to be unique and general. Because it is mostly a rural country, the agriculture occupies the wide territories, filled with Wheat, coffee and the local qat.The most traditional dish is the saltah. Saltah is a soup like stew where vegetables and meat are removed from the cooking liquid and served separately. The soup is then served with a sauce made from ground fenugreek called Helbah. It is served with lunch and is considered the national dish of Yemen. *

The most important feature of the Yemeni cuisine is the fact that it is very spicy and the hot taste is the most frequent one. There is a wide range of such sauces and dressings, used to spice up the meat or the salads. Since cereals are grown in the country, Yemen people also make their own traditional bread, called the mellawach, which is served with a spicy hot sauce that contains many spices, called the zahaug. Zahaug (zahaug is salsa in which we call it in the west) is also put on grilled meat, besides the hilbeh (hilbah is another name for saltah), fenugreek or coriander paste. The Yemen cuisine includes Lebanese and Indian aliments and spices and also the Arabic general rules, Egyptian and Persian tastes, in a unique combination and authentic cuisine. Yemeni cuisine is extremely popular among the Arab States of the Persian Gulf 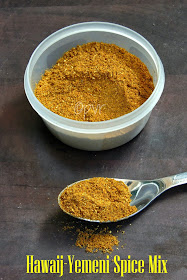 While searching for a simple recipe from this cuisine, i saw this spice mix and got completely hooked to it. This Hawaij, the popular Yemeni spice mix is quite used in most of the Yemeni dishes.This flavourful spice mix is very much needed to flavor the meat dishes and broths there. Even though this spice mix is easily available in market in Yemen, this mix can be prepared easily at home. But trust me,freshly grounded spice mix will be much more strong in flavor when compared to the store bought ones.Even i tried adding this spice mix for making a quick rice, and the rice came out simply awesome with a beautiful flavor. 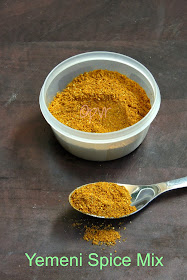 Place all of the whole spices (except turmeric) into a frying pan, roast on medium heat for 2-3minutes. Dont burn the spices.

Once the spices  gets cool, place them into a coffee grinder or a spice grinder.

You could also use a mortar and pestle. Grind until smooth.

Sieve the mixture to remove the large pieces.

Then mix in the turmeric.

Store in a glass jar or wrap in plastic bags to give as a gifts.

Thanks for visiting my blog n leaving ur valuable comments...Really am very thankful to u for taking time n reading my recipes.

Please note that any comments with seperate links to any external websites or blog events or advertisements may not be published. Thanks for understanding the same.